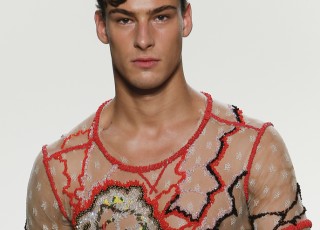 .
Neil Grotzinger : a masculine fashion evoked in androgynous silhouettes with embroideries, transparencies, provocation and panache… Whether it’s in his end-of-year show or his Instagram account (@nihl.nyc), Parsons student Neil Grotzinger is adept at defying codes. We wanted to question him on his relationship to transparency, a word that, thanks to our current era, can be conjugated in every sense of the term.

What do you think about this ubiquity of transparency not only in fashion, but also in finance, politics, food, cosmetics etc etc?

I think transparency has become a part of our recent vocabulary because of the fact that political systems today are so riddled with lies and complex jargon that it is very difficult to see the truth. Whether that pertains to fashion or not, it relates to how I was utilizing lace within this collection. I wanted to debunk the masculine façade, by taking objective male archetypes within fashion and transforming them into their feminine counterpart. One of the pieces within the collection, for example, was a transparent lace wrestling singlet that was then embroidered over with Swarovski crystals. In this case, if the archetype was a symbol of male athleticism, I wanted its counterpart to be somewhat like lingerie. The intention was to utilize transparency to show the fine line between what we perceive something to be and what it has the potential to become based on subtle transformations.

Transparency is also in this way many of us today expose ourselves on social media. Do you think your work could be linked to this “air du temps” we live in?

In a way yes, I felt that there needed to be a certain level of exposure because the intention was to exploit symbolic separates. This collection was about the construction of male identity, so I felt that if there were parts which were left empty it would enhance the feeling of something being built onto the surface.

You made the choice to use total transparency on men’s silhouettes, which is rather unusual. Was it a purely aesthetic choice, or is there a kind of “manifesto” behind this (political message, provocation, avant-garde…)?

It was actually much more political than it was aesthetic. Every design choice that was made throughout the course of building this collection was based around revealing fictitious qualities of masculinity. Transparent lace was a perfect base fabric for certain garments because it was not only like a blank slate, but it also had an incredibly feminine connotation. Building on top of it with embroidery was a way of washing over that femininity, which was why most of the embroidery pertained to symbolic details within menswear. If I was making a t-shirt, for example, I would hand bead the ribs and wherever you would expect to see a serging stitch. In other places, however, the embroidery was meant to build unique pockets of exposure within transparent garments, so only very specific parts of the body were shown. In this case, the intention was to reveal the male body in a very unnerving way, so as to push the boundaries of what we might consider to be socially acceptable within menswear.

Transparency can be linked to revealing too-much, so how did you work to keep your silhouettes elegant and refined?

I wanted my pieces to have a somewhat fragile balance between elegance and blatancy. In most cases, I really did intend to reveal too much, and very purposefully chose to expose parts of the body that we might consider to be unsophisticated or inappropriate. The elegance of each piece kind of worked its way in naturally through materiality and silhouette. Most of the archetypical garments I was working with were already very refined, and Sophie Hallette laces are incredibly elegant to begin with. It was really just a matter of figuring out how far I could push exposure or blatancy without losing the natural elegance of my materials. 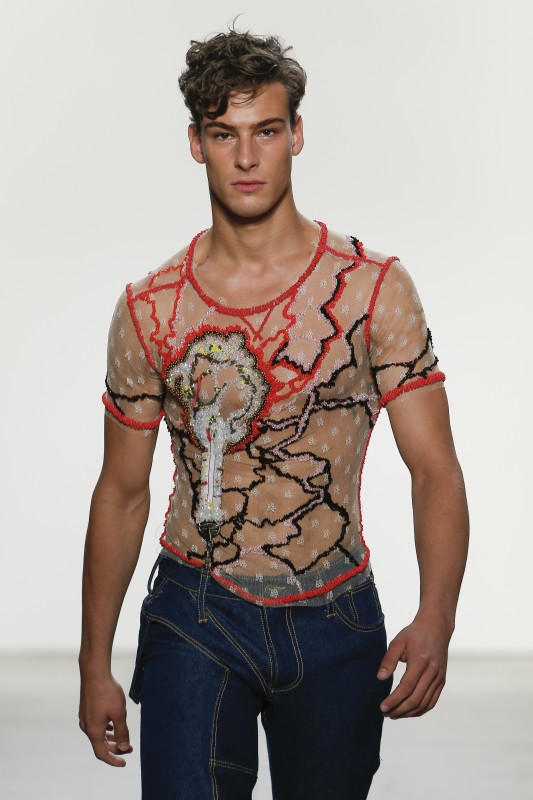